Home > Blog > The Power Of The Holy Scriptures

For centuries society has been coming against the Prophets that God empowered and elected. Its no different today than it was then. Lost people full of evil spirits and demons know the Light of God in others, thats why they work so hard against them. Lying, manipulating, tarnishing anything and everything that has to do with their righteousness and their stand on Gods Holy Word. Even the demons know and believe. But they are no match for God, His unchanging Holy Word and His omnipotent power and Holy Spirit.

There are many adverse side affects for following satan and his ways, his army of fallen angels, never making a change, never delving into Gods word, never praying for deliverence. Satan will run you down every ungodly road he can find, reek massive havoc in your life, rob, steal and destroy you, including untimely death. God allows suffering many times to bring us to our knee’s and worship Him only, but many continue in their rebellion, which is really witchcraft, very indicative by a constant need for control. Unfortunately people perish for lack of knowledge and plain and simple outright rebellion and unbelief.

God and His Holy Scripture is unchanging, the same yesterday today and tomorrow. There is power and Holy protection in the Word. We are in the last day folks, God is getting ready to judge the seven churches. Is your house clean? Is it filled with the Word of God, because you can sweep a house clean, but if you don’t fill it with the Word of God, satan and his minions will infiltrate it seven times worse than it was before. And there are some very distinct consequences for not knowing and following Him in the roadmap He’s provided in His Holy Word. 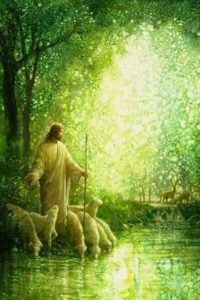 Revelation 1:9-20
I, Yochanan, am a brother of yours and a fellow-sharer in the suffering, kingship and perseverance that come from being united with Yeshua. I had been exiled to the island called Patmos for having proclaimed the message of God and borne witness to Yeshua.I came to be, in the Spirit, on the Day of the Lord; and I heard behind me a loud voice, like a trumpet,saying, “Write down what you see on a scroll, and send it to the seven Messianic communities — Ephesus, Smyrna, Pergamum, Thyatira, Sardis, Philadelphia and Laodicea!”I turned around to see who was speaking to me; and when I had turned, I saw seven gold menorahs;and among the menorahs was someone like a Son of Man, wearing a robe down to his feet and a gold band around his chest. His head and hair were as white as snow-white wool, his eyes like a fiery flame,his feet like burnished brass refined in a furnace, and his voice like the sound of rushing waters.In his right hand he held seven stars, out of his mouth went a sharp double-edged sword, and his face was like the sun shining in full strength.When I saw him, I fell down at his feet like a dead man. He placed his right hand upon me and said, “Don’t be afraid! I am the First and the Last,the Living One. I was dead, but look! — I am alive forever and ever! And I hold the keys to Death and Sh’ol.So write down what you see, both what is now, and what will happen afterwards.Here is the secret meaning of the seven stars you saw in my right hand, and of the seven gold menorahs: the seven stars are the angels of the seven Messianic communities, and the seven menorahs are the seven Messianic communities. Complete Jewish Bible 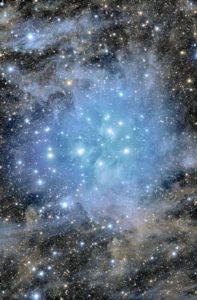