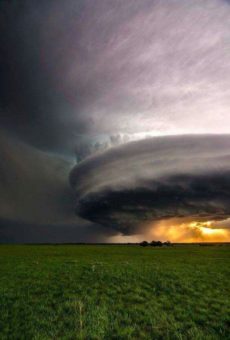 My hand will be against the prophets who have futile visions and produce false divinations; they will not be allowed into the council of my people, or be written in the register of the house of Isra’el, or enter the land of Isra’el. Then you will know that I am Adonai Elohim. They deserve this, because they have led my people astray by saying there is peace when there is no peace. If someone builds a wall without mortar, they ‘plaster’ it with whitewash [to make it appear strong]. Tell these ‘plasterers’ that a cloudburst is coming, with huge hailstones and gale-force winds; and the wall will fall down. Then people will ask you, ‘Where is the whitewash you used to “plaster” it?’” Therefore Adonai Elohim says: “In my rage I will cause gale-force winds to break out, and in my anger there will come a cloudburst, with huge hailstones to consume it in fury. This is how I will break down the wall you covered with whitewash — I will smash it to the ground, so that its foundation will be revealed. The wall will fall down, and you will be consumed with it. Then you will know that I am Adonai. In this way I will spend my fury on the wall and on those who covered it with whitewash; and I will say to you, ‘The wall is gone, and so are those who “plastered” it,’ that is, the prophets of Isra’el who prophesy about Yerushalayim and see visions of peace for her when there is no peace,” says Adonai Elohim.’

A 3-fold judgment is given to the false prophets: 1) They would not be in the council of God’s people 2) their names would be wiped from the register of Israel 3)they would never return to the Land.

False prophets had lulled the people into false security. Phony “peace”promises, while sin continued on the brink of God’s judgment, was a way, so to speak, of erecting a defective “wall” and whitewashing it to make it look good. Such an unsafe “wall” was doomed to collapse when God would bring His storm, picturing the invaders’ assault.

These descriptions are all images belonging to the illustration of the wall, not meant to convey real wind, flood, and hail. The Babylonians were the actual destroyers of Israel’s hypocritical false spirituality.

The catchall term Babylonian, commonly used for early heathen worship, came to apply to the assortment of rituals, offerings, sacrifices, and oblations the people invented and prescribed to appease the gods. Through their idols, the spiritual forces occupying and manipulating them and their land were petitioned for intervention and prosperity. The pantheon of gods were believed to exercise authority to maneuver the weather, crops, warfare, life, and death. According to what the deity prescribed, their worship and rituals consisted of divination, augury, astrology, magic and sorcery, fortune-telling, and diverse, yet crude, animal and human sacrifices. “The Prophet’s Dictionary” by Dr. Paula Price Phd