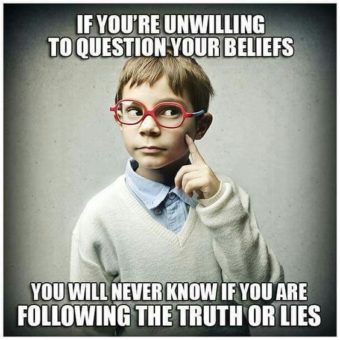 Don’t let anyone deny you the prize by insisting that you engage in self-mortification or angel-worship. Such people are always going on about some vision they have had, and they vainly puff themselves up by their worldly outlook. They fail to hold to the Head, from whom the whole Body, receiving supply and being held together by its joints and ligaments, grows as God makes it grow. If, along with the Messiah, you died to the elemental spirits of the world, then why, as if you still belonged to the world, are you letting yourselves be bothered by its rules? — “Don’t touch this!” “Don’t eat that!” “Don’t handle the other!” Such prohibitions are concerned with things meant to perish by being used [not by being avoided!], and they are based on man-made rules and teachings. They do indeed have the outward appearance of wisdom, with their self-imposed religious observances, false humility and asceticism; but they have no value at all in restraining people from indulging their old nature. Complete Jewish Bible

Paul warns the Colossians not to allow the false teachers to cheat them of their temporal blessings or eternal reward by luring them into irrational mysticism. Since the false teachers took great delight in it, their “humility” was actually pride, which God hates. “Worship of Angels” The beginning of a heresy that was to plaque the region around Colosse for several centuries and far beyond, a practice the Bible clearly prohibits.

Like virtually all cults and false religions, the Colossian false teachers based their teaching on visions and revelations they had supposedly received. Their claims were false, since Jesus Christ is God’s final and complete revelation to mankind. There is no spiritual growth for the body (the church) apart from union with the Head. Christ.

The futility of asceticism, which is the attempt to achieve holiness by rigorous self-neglect, self-denial and even self-infliction. Since it focuses on temporal “things which perish with the using” asceticism is powerless to restrain win or bring one to God. While reasonable care and discipline of ones body is of temporal value, it has no eternal value, and the extremism of asceticism serve only to gratify the flesh. All too often ascetics seek only to put on a public show of their supposed holiness. Bible Footnotes

Mystic Religions:The vehicle most commonly used to attain to such higher knowledge, self-realization, and mystical enlightenment is religion, mystery religions most of all. Secret societies, another name for them, have proclaimed access to wisdom the ordinary human lacks but craves. Tracing these societies shows they are invariably reinventions of the ancient Egyptian and Babylonian religions and deities of old. At the heart of every one of them is Luciferianism. That is the deadly light of Lucifer, the fallen cherub of Ezekiel 28, and acquisition of his powers to rule and prosper in the earth.

The inclusion of Christianity in their teachings makes them a real threat to true believers and even devoted ministers risk their redemption. Believing they serve the true and living God, they strive to gain a so-called deeper knowledge of the true Messiah. These mystery religions are said to be the underlying power of the world that is under the sway of the wicked one. The Prophet’s Dictionary by Dr. Paula Price PhD