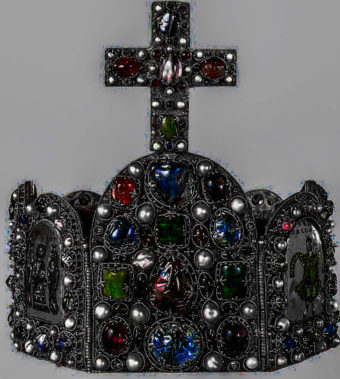 Then Samuel called the people together to the Lord at Mizpah, and said to the children of Israel, “Thus says the Lord God of Israel: ‘I brought up Israel out of Egypt, and delivered you from the hand of the Egyptians and from the hand of all kingdoms and from those who oppressed you.’ But you have today rejected your God, who Himself saved you from all your adversities and your tribulations; and you have said to Him, ‘No, set a king over us!’ Now therefore, present yourselves before the Lord by your tribes and by your clans.”

And the Lord answered, “There he is, hidden among the equipment.”

So they ran and brought him from there; and when he stood among the people, he was taller than any of the people from his shoulders upward. And Samuel said to all the people, “Do you see him whom the Lord has chosen, that there is no one like him among all the people?”

So all the people shouted and said, “Long live the king!”

Then Samuel explained to the people the behavior of royalty, and wrote it in a book and laid it up before the Lord. And Samuel sent all the people away, every man to his house. And Saul also went home to Gibeah; and valiant men went with him, whose hearts God had touched. But some rebels said, “How can this man save us?” So they despised him, and brought him no presents. But he held his peace.

(Footnotes Deut. 17:15-20) Specific restrictions were placed on the kings that God established as king. He had to be a brother Israelite. He was not to acquire many horses, he was not to take multiple wives and he was not to accumulate much silver and gold. The king was not to rely on military strength, political alliances, or wealth for his position and authority, he was to look to the Lord for his wisdom and guidance. The king was to be obedient to the will of God, which he learned from reading the law. The result of his reading of the Pentateuch (first five books written by Moses) would be the fear of the Lord and humility. The king was pictured as a scribe and scholar of Scripture. The king was not to be above God’s law, any more than any other Israelite.

Today we pray for world peace and wisdom among all of our world leaders, Israeli and otherwise. We pray that their hearts will be turned toward the one true God who is the Alpha and Omega and true ruler of all things. In Yeshua’s precious name we pray, Amen.